The last we heard of L.A. producer Henry Laufer aka Shlohmo was the surprisingly uninspired No More EP, a collaboration with R&B singer Jeremih. Thankfully, and as the title suggests, Shlohmo emerges with newfound strength on his latest single “Emerge From Smoke”. The track shows Shlohmo in his darkest mood yet; firing laser-beams of squealing dystopian synth lines over hollow percussions and slowly unraveling, bottomless basslines. As shown many times before, he is a master of creating tension by slowly adding layers of elements, then subtracting them before everything comes crashing down like an alien ship wreckage. “Emerge From Smoke” makes me hope that Shlohmo got most of his R&B dreams out of his system, as he is at best when moving in intersecting, indistinguishable genres, and having more in common with Clark then The Weeknd. 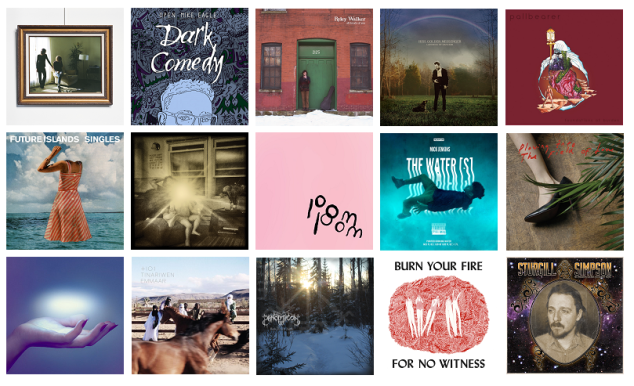 There are many bands that sound like The Cabana Kids, but few can write an emotive “surf-pop” track like “Sortida”. The western-styled guitars are sublime and the interchanging girl-boy vocals brings an added nerve to a track that checks many boxes on how to write ear-catching, instantly gratifying melodies. If you like what you’re hearing don’t forget to check out the band’s debut EP The Bird & The Bees released via Small Plates.

It’s hard to pick a favorite Gold Robot Records release this year, there has been so many great (Yalls, Ladada, Roman Ruins, Monster Rally & Jay Stone), but Brooklyn quartet Conveyor is possibly the strongest contender with the release of the short and sweet Ani Mag EP; an unexpected acoustic detour, at least if compared to their warped, sonically experimental self-titled debut. The softly strumming opening track “Wry Thing” is nonetheless complex in its simplicity, adding a depth to Conveyor’s craft and revealing them capable of reaching further and wider than their previous work had me believe. Listen above.

I’ve really warmed up to the songs Father John Misty, the moniker of Joshua Tillman, so far premiered of his upcoming new album I Love You. Like previous track “Bored in the USA”, the instrumentation of  latest track “Chateau Lobby #4 (in C for Two Virgins) magnificently dresses Tillman’s narrative in sentimental but timeless harmonies, resulting in the most thought-provoking and adventurous music of his decade or so long career. Just like his previous album Fear Fun, which was the first under the Father John Misty moniker, it sounds like a huge departure from the music he recorded under own name. Undeniably, his years with the Fleet Foxes rubbed off in sound and instrumentation, but it doesn’t entirely explain his growth as a songwriter. Something has clearly progressed since his last album, and in these two songs, Tillman reaches the highest possible level of storytelling; full of understated humor and clear-headed insight.

Look for I Love You early next year via Sub Pop.

Kevin Barnes’ Of Montreal reemerged with newfound vitality on last year’s lousy with sylvianbriar, once again making me pay closer attention to the very prolific and ever-changing  outfit. New single “Bassem Sabry”, named after the Egyptian activist and journalist, is the opening track of upcoming album Aureate Gloom, and is Of Montreal’s version of psychedelic funk; sexy and a bit starry-eyed, but it works, and Barnes can check the box of yet another well-made and focused venture. Look for Aureate Gloom on March 3 next year via Polyvinyl.

Experimental electronic pop mastermind Born Gold continues his ”No Sorrow; one new track + video a month” series with November’s “The Song Condemns Itself”. It follows previously featured cuts “Until You Heal” and “I Want To Guard You From Boredom”, and you can check out all tracks so far from No Sorrow on Born Gold’s bandcamp page.

A while back we featured Milwaukee Banks’ hazy “Pluto Bounce”, and here is new cut “Monitor” featuring ambient / IDM trio Rat & Co. The Australian hip hop duo is definitely on to something; blending bounce-y, pulsating bleeps and vintage-sounding synth lines with trippy vocals and spaced-out verses seems to be a working formula. “Monitor” is set to be featured on a double A-side along with “Van Gogh” featuring Andrei Eremin that you’ll find embedded below.

If you recognize the vocals on the first verse of ”Sunday Candy” its Chicago rapper Chance The Rapper, who together with a whole crew lead by Nico Segal aka Donnie Trumpet takes us on a joyous ride into soulful pop with traces of gospel and funk under The Social Experiment moniker. There is an echo of 90’s Prince buried deep in tingly piano chords, lovely horns and spirited vocal harmonies in this charming “world fusion” track that pulls Segal, Chance The Rapper and other members Peter Cottontale and Nate Fox towards the same blissful mode. If you like what you hear, check out more from the project here.